What spatial scale should we use to analyze neuroimaging data? Traditional univariate approaches have focused on analyzing data at the voxel level or averaging activity within a region of interest (ROI). However, multivariate approaches tend to work with larger spatial scales (e.g., searchlights, ROIs, resting state networks, & parcellations). The goal of this tutorial is to provide an introduction to parcellation schemes. We will cover the types of atlases that are available, when to use them, and how to work with them in python.

There is vast diversity in the spatial scales at which different psychological and neurological processes are organized. To study these different mechanisms most effectively, the scale of our methods should be consistent with the scale of this organization (for more detail see: Jolly & Chang, 2021).

Parcellations provide a way to examine the brain at different spatial scales by restricting the number of regions of interest to variable scales as determined by anatomical or functional divisions. We provide extensive detail on anatomical, functional and structural approaches to building parcellations. In general, the goal is to use group together voxels based on either one of these methodological divisions. This grouping of voxels can be either contiguous (voxels that are spatially next to one another in a particular region of the brain) or non-contiguous (voxels that are spatially disjoint, but functionally connected (e.g., resting state networks).

The table below is a useful discussion comparing ROI (parcellation) approaches to searchlights and whole brain approaches. (From: Jolly & Chang, 2021). The goal of this notebook is to provide extensive detail on how the publicly available parcellations have been generated to give you more insight as to which ones would be better suited for your own research questions. 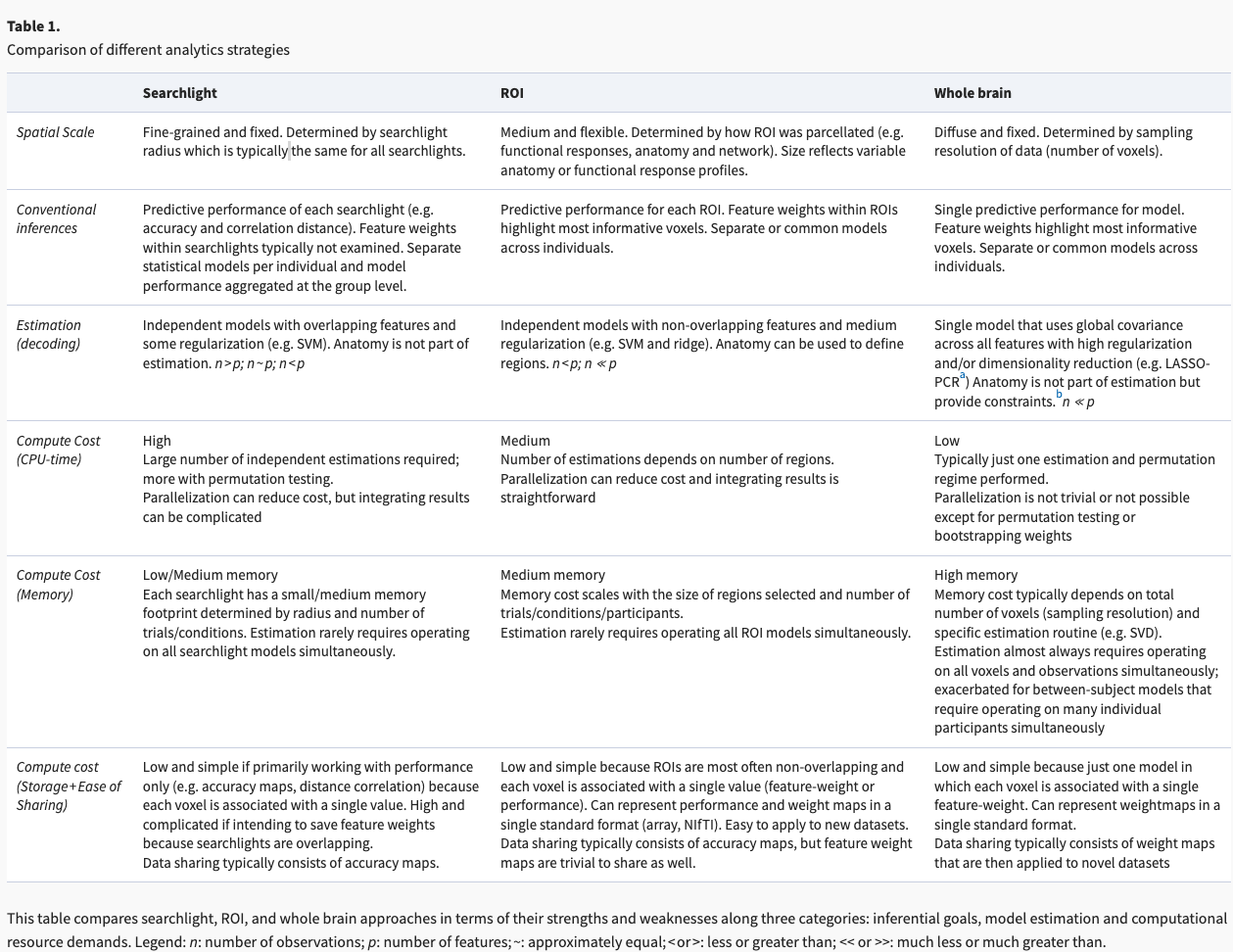 A quick note on labeling:#

There are two main repositories of anatomical and functional atlases that can programmatically accessed via python packages (e.g., Nilearn and Neuroparc). We briefly detail these below and then will provide code-snippets and plotting suggestions for using these packages as we introduce parcellations below.

Here is how each of the atlases can be downloaded using python.

Alternatively, there is also the Neuroparc package, which provides a large repository of standardized atlases (currently 46; see Table below), which can be used interchangeably. Neuroparc includes details to make the comparison between atlases in MNI space easily (Lawrence et al., 2021). Importantly, their Github page README file provides an excellent summary of how the parcellations where created, their description, and their native space.

The table below (Lawrence et al., 2021) includes a list of the parcellations available, the number of ROIs in each depending on the resolution, and whether a anatomical labels are available. Again, if you want further information on these parcellations, we recommend checking out the aforementioned README file. 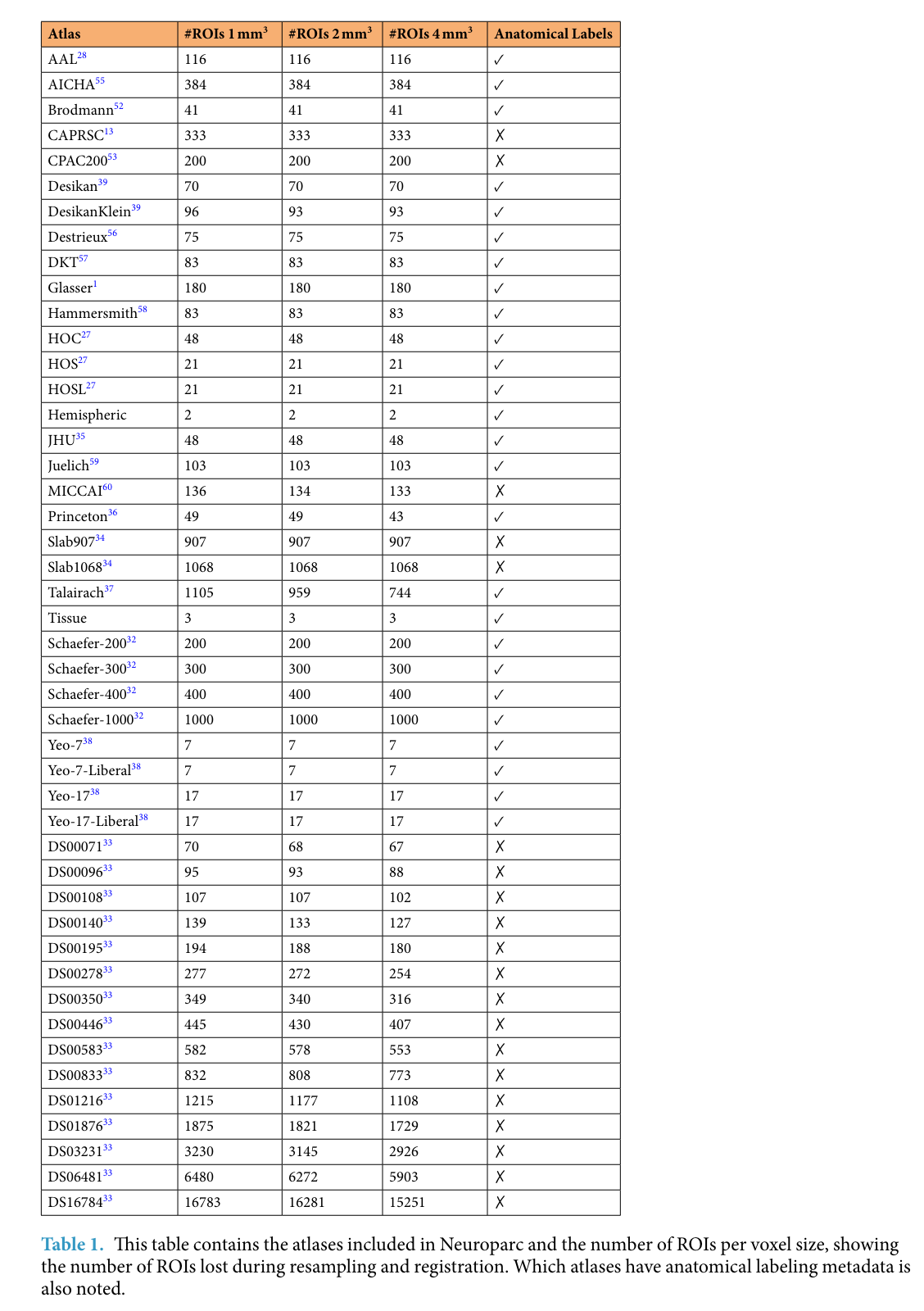 With the advent of MRI, atlases have started to rely on neural macrostructures such as sulci or gyri to distinguish regions, with the expectation that this would result in brain regions with voxels that have a shared cytoarchitecture. The labels in these atlases reflect the spatial location of an anatomical region.

There are different approaches (Direct vs. Mirroring) to set up and generate an anatomical atlas that are well described in Moghimi et al. 2021 if you are interested in reading more. The mirroring approach has become standard practice in most modern fMRI research programs. It entails registering an image that needs to be parcellated to an existent template image that has already been labeled. Each voxel gets the corresponding voxel’s label in the reference image.

Commonly used and referenced template/reference images include the Talairach template (Talairach and Tournoux, 1988) and the MNI 152 template.

Two single-subject attempts to automate these procedures were the AAL atlas and the Talairach atlas (described below). “Single-subject” here means that one individual’s brain was used as the reference point. Unsurprisingly, this means that the anatomical idiosyncrasies of these individuals are reflected in these template images, but these are still commonly used as you will see below.

Multiple-subject atlases use the combination of multiple subjects’ T1 scans as the reference image for mirroring in generating anatomical atlases. Multiple-subject parcelations are thought to be more accurate than single subject parcellations and tend to be probabilistic in that they describe the probability of a voxel belonging to a specific region of the brain based on multiple subjects.

There are numerous ways to assign a subject’s data that you want to be parcellated to a probabilistic atlas. One method is to generate a single reference atlas in which there is one image registration between the reference image and the to-be-parcellated image. Evidently, this is prone to errors of image registration. In this method, the probability that each voxel in your data belongs to a region in the reference atlas is calculated while also taking into account the surface geometry and image intensity, as reviewed in Moghimi et al. 2021 and posited in Fischl et al. 2002/2004. Importantly, this method has been implemented into FreeSurfer and the Human Connectome Project imaging pipeline. The alternative is a multiple-reference atlases approach in which each atlas is assigned to the new brain image separately such that the voxel is assigned to its corresponding image based on its assignment across multiple reference atlases.

To further emphasize, a major obstacle when it comes to anatomical atlases is the degree of idiosyncracy in neuroanatomy as well as the subjective nature of human manual atlases. Importantly, automated algorithms have been generated to bypass the latter and guidelines have been put forth to aid in keeping manual atlases consistent. Likewise, reference atlases exist based on age to deal with changes in neural morphology. We do not include those here.

Numerous multi-subject atlases have been generated and made publicly available. We describe three of the most commonly used ones below:

Atlas image from Freesurfer. You can note the differences from the DK atlas above visually: 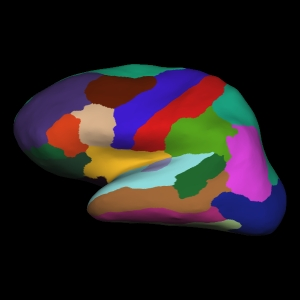 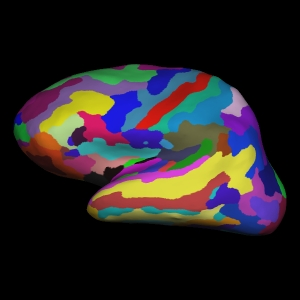 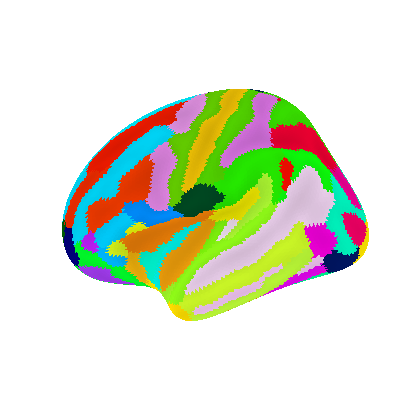 The goal of functional parcellations is to group voxels based on similar function, using either functional activity or functional connectivity as similarity measures. Again, a nice review can be found in Moghimi et al. 2021. The assumption is that functionally distinct brain regions have voxels with shared functional activity and connectivity. For a great discussion of how cortical regions have a ‘connectional fingerprint’ reflecting both observed cell-firing differences and functional imaging activity, see: Passingham, Stephan & Kötter (2002). A combination of resting state fMRI and task-based fMRI have been used to generate these parcellations. Before discussing the implementation and generation of functional parcellations, we wish to acknowledge a couple of ongoing fields of research:

There are two algorithms (among others) used to generate functional parcelltions: (1) cluster-based, (2) graph-based.

Below, we introduce a series of widely used functional parcellations and note which features were used to generate them.

The image above plots the network colors so that networks in different hemisphere have the same colors. If you want to split up the networks into 49 ROIs, nilearn includes a useful connected_labels_regions function. Further information using the Yeo network in nilearn is detailed here.

Something of note is that while we usually think of voxels as belonging to one single region (hard assignment), but it also possible that a voxel can belong to multiple regions (soft assignment). Consider parcellations based on network - (association cortex) regions may be “part of” different networks depending on task. Below, we introduce the idea of multimodal parcellations.

Summary of differences between parcellations#

Here, we summarize the information above and note a few additional tools which may be of interest. The choice of parcellation deeply relates to the scale of the researcher’s question of interest (e.g., region vs. network).

Other forms of parcellations not mentioned here#

Other parcellations exist as well:

For these atlases, we recommend the ENIGMA Toolbox - an opensource meta-analysis package including genetic, disease, and structural metrics. For more information, check out (Lariviere et al., 2022).

Also, there are parcellations derived from meta-analyses of task data such as Neurosynth. A few of these atlases are available on Neurovault